Are you ready to make 2020 your best year ever? If you said, “Yes”, here is the first of a 7-step plan to actually achieve your goals and dreams this year.

Do you believe? Before we can succeed we first must believe. Allow me to share a story.

As a runner and former cross country coach I’ve always been inspired by running stories. In the 1952 Olympics Roger Bannister had a disapp 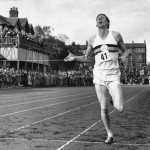 ointing 4th place finish in the 1500 meters, however, he walked away more determined than ever to be the first in history to break the 4-minute mile. Two years later on May 6, 1954, after many failed attempts, Roger Bannister did it. He ran the mile in 3:59.4 seconds! Here’s the crazy thing; just 46 days later the mile was broken again. Since then more than 1300 people have broken the 4-minute mile.

So why did no one break the 4-minute mile until 1954, then 46 days later it was broken again, and now the 4-minute mile is standard for all professional middle distance runners? The answer, of course, is that no one truly believed it was possible until someone did it. Roger Bannister had to believe and envision himself doing something that had never been done before, but once he crashed through the barrier the rest of the world knew it was possible, and followed.

The reality is that your self-imposed limiting beliefs are the greatest hindrance to achieving your best year ever.

You’ve heard it said, “Nothing is impossible to them who believe”, but do you know where it came from? It came from a Bible story in Mark 9 where a father came to Jesus and said, “If you can will you heal my child”? Jesus replied, “If I can, don’t you know all things are possible to him who believes.”

Will you accept the challenge?